A Blog 30 Years in the Making 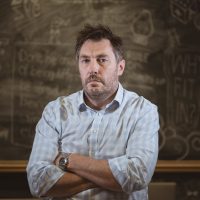 It’s taken me 30 years to write this. So listen up. It’s important.

The agency that’s unfortunate enough to have me as a doer of things turns the ripe old age of 30 this year.

1991 was the year. The big year that an agency was born. One that incorporated an actual philosophy, which formed a [name link] and inspired a whole array of values. Stuff that meant, well, it meant something. Where a lot of brands get caught up and busy themselves saying nothing.

In the year of our Lord, nineteen hundred and ninety-one, it was a different time. Bez could see. Shane McGowan had 17 teeth. But something pretty major also happened. The public were given the use of the World Wide Web – no, not the internet, but the thing we use to browse websites. The wwwonder of communication was rolled out to every Tom, Dick and Harry that could afford a computer. But it didn’t happen overnight. Agencies had the technology, but it wasn’t completely holistic. Nor was it encouraged, and rightly so. Pens furiously scribbled on pads scribbled on, while the tunes of the day played in the background. I remember those days fondly. Ideas were the thing that happened before looking at technology.

It was a different industry back then. Golf GTIs were fast. Letraset pads were scribbled on furiously by Rotring pens. It was a carefully considered craft. Creatives knew about ink and printing techniques. Paper engineering (remember paper?) was meticulously worked out for highly engaging DM campaigns.

There were big studios full of artworkers; really talented individuals, whose sole purpose was to make the mad stuff that creatives thought up look amazing. Retouchers. People who knew their keming from their kerning. People who could turn thoughts into art. It wasn’t just Robert Maxwell that went overboard. It was creativity.

So now we’re in the futuristic landscape of 2021, with everybody and their dog wandering around staring at screens, aimlessly getting lost in Youtube, have we come a long way? In a media sense, no we haven’t.

Media channels are everywhere. And updated every nanosecond. So getting something in front of your target’s eyes becomes a digital, calculated, algorithmic undertaking. It’s a process. Is it an art? It’s certainly very complicated.

Now, from the view of a creative, we have to remember to keep things as simple as we can.

So before I ramble on, reminiscing about the past, I’d like to leave you with something I learned around 30 years ago. One I still adhere to.

If everyone is fighting to be heard amongst a crowd of a million, step outside the crowd, and become a crowd of 1. Then everyone will listen to you.

One voice delivering one message.

30 years. And what have we learned? If we remember to do it as we did 30 years ago, knowing what we know now, we can nail it.

Going Nowhere? Have a Word.

Alan Stobie discusses the importance of not standing still

Sales and Marketing, or Sales vs Marketing?

Steve Milne talks about the importance of aligning the efforts of sales and marketing teams.

Webinar: CX. Make Sure the C Doesn't Stand for Crap